Altium Education helps college students learn the basics of PCB design and then help them to create their first printed circuit boards.

PCB design can be accomplished using a number of computer-based tools, such as Cadence Allegro, Siemens PADs, and Altium Designer. These tools can be overwhelming for novice PCB designers. Altium recently announced Altium Education, a new series of online learning modules that are targeted at students and newcomers to the field.

Altium’s Altium Educational offers a free library of university courses, software, and licenses that can be used to enable students to access online professional engineering education.

PCB Design is a Multi-Stage Process

As technologies become increasingly more complex, it can be difficult to design a printed circuit board (PCB). Circuit designers need to understand the purpose and functionality of the board. It is important to understand everything that will be going into the design so the designer can plan accordingly, The first step is to create a two-dimensional schematic that shows how each component is connected and the circuitry involved.

The schematic is then converted into a three dimensional graphical rendering which is used to manufacture the PCB. This involves placing components and lying down electrical paths (pathways for current flow) on a substrate in a logical manner to ensure that the circuit functions properly. Traces can move between layers using vias.

The board is now ready for manufacturing. Altium Education was created to assist new and prospective designers in gaining a solid understanding about these four steps. This is crucial for building a reliable, functional PCB.

An Altium Education course is composed of smaller blocks called units. Each unit is a series of lectures that are both in video and text format. It introduces students to a specific concept. The topics get more complex as the unit progresses.

The content of the units can be followed by the student in Altium Designer. This will allow them to learn the basics of PCB design concepts, including schematic capture, layout, routing, signal integrity, and routing. Crosstalk can be caused by inductive or capacitive coupling on a PCB. It is therefore important to fully understand signal integrity concepts in order to route the traces optimally.

Altium Education offers free access to a license to anyone with an active university email address. Licenses can be renewed every six months. Altium Designer is an industry-standard schematic capture and layout program that includes over 200,000 electronic parts and design templates. 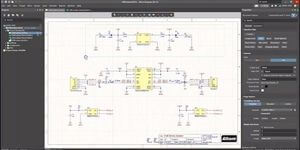 Coherent Market Intelligences estimates that the market for PCB design software is worth more than two billion dollars as of 2021. The course curriculum and the free Altium Designer license offer students a self-paced method to learn the basics of PCB design. Understanding the tools and techniques involved in PCB design is becoming more important as modern PCBs become more complex and faster.